One puzzling feature of the National Highway Traffic Safety Administration (NHTSA) analysis of the costs and benefits of the proposed rollback of the Obama era CAFE standards is that the use of credits that allow manufacturers to comply with the regulations is not accounted for. Manufacturers are permitted to take advantage of these credits by averaging emissions reductions across their car and truck fleets, by banking credits for future use, and by trading credits between manufacturers. Further, because there is variation in technology cost estimates across cars and light trucks, and between manufacturers, there are likely to be significant cost savings to all parties from these flexible credit mechanisms.

However, NHTSA, under the Energy Independence and Security Act, is not allowed to include any of these credit flexibilities when they analyze costs to set standards. This constraint is designed to address concern by Congress that such crediting results in cost estimates that are too low, leading to standards that are too strict. We argue that standards should be set based on the best estimates of the actual costs and benefits, which would include the use of credits by manufacturers for compliance. In setting parallel standards for carbon dioxide (CO2) emissions under the Clean Air Act, the EPA, in contrast to the NHTSA analysis, does account for the cost savings from all credit trading provisions in their analyses of the regulations.

It is useful to look at whether this trading ability appears to be playing a role in overall compliance in recent years. Both NHTSA and EPA allow credit trading for compliance, but we rely here on the EPA data because there is more publically available data on CO2 credit trading. We plot the quantity of credits traded among manufacturers in each compliance year, from 2012 to 2016. These data appear in Figure 1. 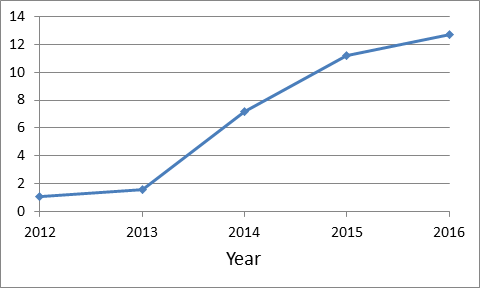 There was little trading in the first few years. In 2012, manufacturers traded about one million credits, denominated in megagrams (Mg), of carbon dioxide equivalent (CO2e) (a Mg is a million grams). To put this number in perspective, a new vehicle emits about 300 grams of CO2e per mile, and the agencies assume that vehicles are driven about 200,000 miles over their lifetime. The amount of required abatement mandated from the standards requires a reduction of about 10 grams of CO2 per mile each year. One million credits converts to about 0.33 grams of CO2 per mile per vehicle, so credits traded represent about 3.3 percent of the annual required reduction for 2012 vehicles. However, after the initial years of trading, the market for trading credits quickly expanded. Each year has seen an increase in the volume of credits traded, and by  2016, the number traded were more than ten times higher than in 2012.  In 2016, credits traded represent around one percent of all new vehicle greenhouse gas emissions (GHGs), or a whopping 33 percent of the additional required emissions reduction per vehicle from the regulations.

Clearly credit trading is playing a major and growing role in actual manufacturer compliance with the standards. We found in our analysis of credit markets that roughly a third to a half of manufacturers have entered the credit trading market either as buyers or sellers. In Table 1, we show the credit trades that took place in the compliance year 2016, the most recent year for which published data is available. There are three selling firms and three buying firms, with Honda selling by far the most credits.

Manufacturers occasionally carryback credits or opt to transfer earned credits between their fleets to resolve compliance shortfalls. Trading credits from another manufacturer and transferring them across fleets occurs far more frequently. Also, credit trading has taken the place of civil penalty payments for resolving compliance shortfalls. Only a handful of manufacturers have had to make civil penalty payments since the implementation of the credit trading program.

This highlights the importance of including credit trading between firms in assessing the costs of complying with the regulations in the agency models. One barrier to including credit trading in current agency models is the use of a “cost minimization” approach that predicts which fuel-saving technologies will be adopted over time based on engineering cost estimates and assumed manufacturer cost-minimization behavior. The model does not account for manufacturer interactions and the over or under compliance we discussed above. The models could be extended to include such behavior, which would reduce the overall estimated costs of tighter standards.

The benefit-cost analysis should estimate the true costs of the regulations, accounting for cost reductions due to the allowed flexibilities of averaging, banking and trading of credits. If the agencies are worried about high costs of the regulations, especially during periods when gasoline prices are low, they should consider additional flexible mechanisms. The NHTSA regulations already have a “safety valve” to mitigate high costs of compliance in that firms are allowed to pay fines if they do not comply. Although currently most firms are more likely to trade with another firm than pays fines (see quote from NPRM above), the ability to pay a fine serves as maximum backstop cost for additional fuel economy improvements. EPA, under the Clean Air Act, is not allowed to set fines, but there are other safety valve approaches they could consider. For example, the agency could offer to sell credits at an established price or at auction each year. The agency has used this approach in other policies to reduce emissions, such as the SO2 auctions under the Acid Rain program and GHG permit auctions under the California AB 32 program. In general, flexible mechanisms such as credit trading and safety valves can lower the costs of meeting the standards.