Expected fuel cost savings are at the center of the Trump administration’s proposal to weaken the fuel economy and greenhouse gas (GHG) standards. Two years ago, the Environmental Protection Agency (EPA) and National Highway Traffic Safety Administration (NHTSA) under the Obama administration estimated that the value of the fuel cost savings from higher fuel economy would vastly exceed the costs of adding fuel-saving technologies to meet the standards. Last month, the same agencies under Trump estimated that fuel cost savings from the Obama standards would be just half the costs of raising fuel economy. According to the new analysis, total benefits of weakening the standards would exceed the total costs even without accounting for traffic accidents. In this post, we try to figure out why the analyses from each administration’s agencies differ so drastically in only two years.

We’ve done a series of calculations to try to figure out why fuel cost savings have fallen by half. The figure below shows the per-vehicle fuel cost savings from the Obama and Trump analyses in 2016 dollars, for vehicles sold in model year 2025. To make these calculations, we collected from the two analyses seven types of numbers: 1) differences in fuel consumption rates (gallons of fuel per mile traveled) by manufacturer and class between a scenario of freezing standards and a scenario of tightened standards; 2) gasoline prices; 3) vehicle miles traveled (VMT); 4) change in VMT caused by higher fuel economy (that is, rebound); 5) sales mix; 6) vehicle survival rates (the probability a vehicle survives to a particular age); and 7) discount rate. To facilitate comparisons between the Obama and Trump analyses, we define fuel cost savings by comparing fuel consumption rates in a scenario with tightening standards (for example, under the Obama standards), with a scenario of freezing the standards (for example, at their levels in model year 2021). Note that the Obama analysis compared fuel consumption rates (#1 above) from slightly different scenarios than the Trump analysis (we return to this below). The figure shows that the Trump fuel cost savings are about 12 percent lower for cars and about 4 percent higher for light trucks, compared to the Obama estimates. Overall, this implies a slight (4.6 percent) reduction in average fuel cost savings per vehicle.

Of those 7 types of numbers that affect the fuel cost calculations, the agencies under Trump have changed their assumptions (i.e., updated values for the same variables) on the first 5; they haven’t changed their assumptions on survival rates and discount rates. In the table below, we show the individual effects of each of these 5 assumptions on the fuel cost calculations. We begin with the 2016 calculations, and one at a time we substitute the 2018 assumptions. For example, the third row shows that if the agencies had calculated fuel cost savings in 2016 using the 2018 VMT assumptions, fuel cost savings would have been 7.8 percent higher for cars and 4.7 percent higher for trucks than the numbers they actually reported in 2016. The first row shows the effects of the fact that the Obama and Trump agencies are comparing different scenarios from one another, as well as certain other changes in modeling assumptions. The table shows that the change in fuel consumption rates is the most important factor, and that the other 4 factors roughly cancel one another. Overall, the changes in assumptions between the Obama and Trump analysis explain only a small share of the missing fuel cost savings.

This brings us back to the question: why are estimated fuel cost savings in 2018 half what they were in 2016? As far as we can tell, the answer must be the on-road vehicle fleet. As we discussed here, the agencies argue that the on-road fleet is smaller when standards are weakened than when standards are tightened. The smaller fleet reduces the fuel cost savings from tighter standards, and it appears that this effect explains almost the entire reduction in fuel cost savings between the 2016 and 2018 analyses. But as we argued last week, there is good reason to suspect that the agencies are underestimating the fuel consumption and fuel costs if standards are weakened because they do not account for the increase in driving of vehicles that aren’t scrapped. In other words, a very large part of the administration’s argument for weakening the standards depends on the questionable assumptions about the way vehicles are used.

Comparing Lifetime Fuel Cost Savings Per Vehicle in the Obama and Trump Analyses, for Vehicles Sold in Model Year 2025 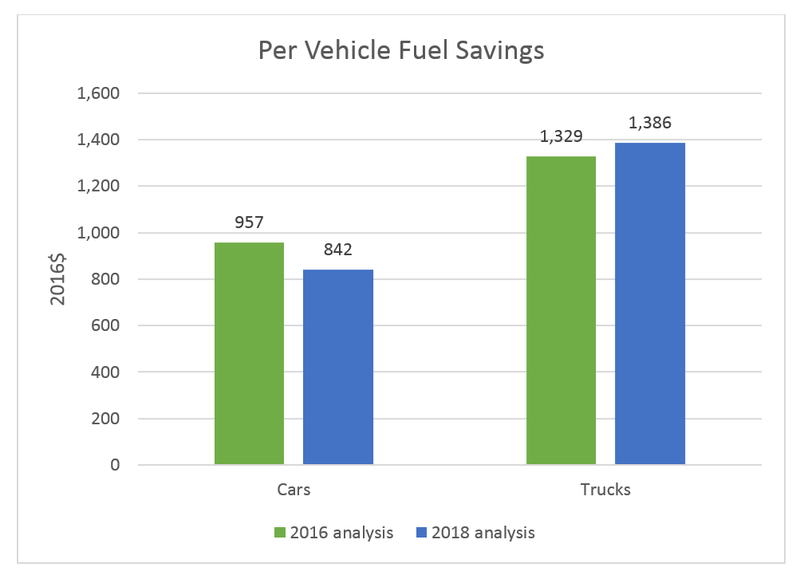 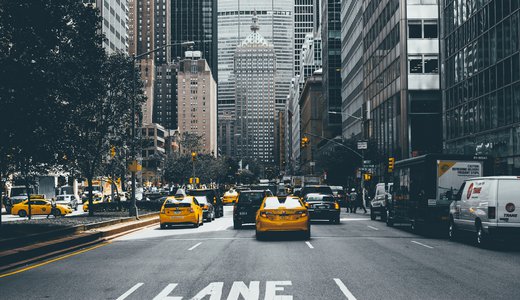