Will Voters Set Back Oil and Gas Development in Colorado?

On November 6, Coloradans will vote on ballot Proposition 112, which would prevent new oil and gas development across much of the state. If passed, it would rival the state of New York’s 2014 decision to place a moratorium on hydraulic fracturing (“fracking”) as the most significant restriction on new oil and gas development in the United States. Unlike New York, however, Colorado has experienced rapid growth in oil and gas production over the past two decades, making the industry a powerful economic and political player. 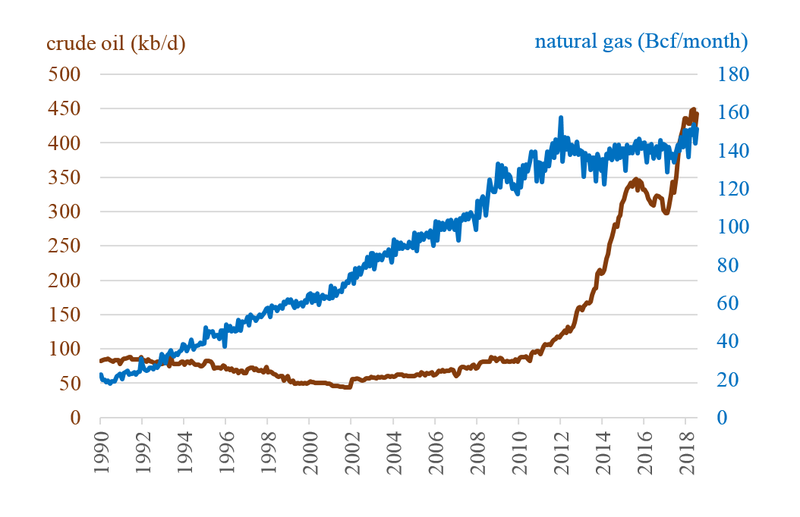 Prop 112 is a new version of a previously defeated measure that would increase “setbacks”—the distance required between new oil and gas operations and human or environmental features, such as buildings, rivers, or other potentially sensitive areas. Prop 112 would not apply to federal land, and could be made even more stringent by a local government. The proposition would establish a new minimum setback distance of 2,500 feet, a big jump from the current distances of 1,000 feet from schools, hospitals, and the like; 500 feet from homes; and 350 feet from outdoor areas (e.g., playgrounds). What’s more, the setback would apply to many new features described in the measure as “other vulnerable areas, which include public and community drinking water sources, irrigation canals, reservoirs, lakes, rivers, perennial or intermittent streams, and creeks, and any additional vulnerable areas designated by the state or a local government."

Setbacks are a standard feature of state regulations. In a 2013 report, we found that regulations in Colorado were among the strictest across the United States for building setbacks, with an average restriction of around 300 feet (although greater distances can generally be required for special cases). Only 65 percent of states have building setbacks but the balance have setbacks from other points of reference (e.g., roads and property lines). Setbacks from water sources are less common (only about 40 percent of states had them in 2013).

Colorado’s setback restrictions in Proposition 112 would very likely be the tightest in the nation and would render inaccessible more than half of the state’s oil and gas resources (experts have debated the precise share of resources that would be affected). What’s more, shale gas and tight oil wells are often “refracked” and conventional wells can be reopened when the economics warrant, but these activities would also be subject to the setback.

Supporters of the measure focus on the need to protect public health and safety, criticizing the industry for “blatant disregard” and the regulatory body for poor oversight. There are also more than a few national environmental advocacy groups supporting the measure. Unlike the primary concerns of most local advocates (i.e., local public health and safety), these national groups are seeking to advance the “keep it in the ground” movement, which aims to prevent new fossil fuel development.

Opponents focus mostly on the economic impacts: job losses, reduced tax revenue, and slower economic growth. And, to a lesser extent, the potential for increased pollution as coal becomes more competitive with natural gas in the power sector. They also tie Prop 112 to Prop 74, which would require compensation to property owners who lose asset value (including oil and gas resources) as a result of government action. Industry has been supporting Prop 74, arguing that passing Prop 112 could bankrupt the state and force it to engage in a huge number of lawsuits from property owners.

Public ire over the oil and gas industry is not new in Colorado, particularly along the densely populated Front Range. Seated at the eastern foot of the Rockies, the string of cities and suburbs that stretch north of Denver are growing rapidly. New development is encroaching on old oil and gas wells while at the same time new wells are being drilled close to homes and schools. 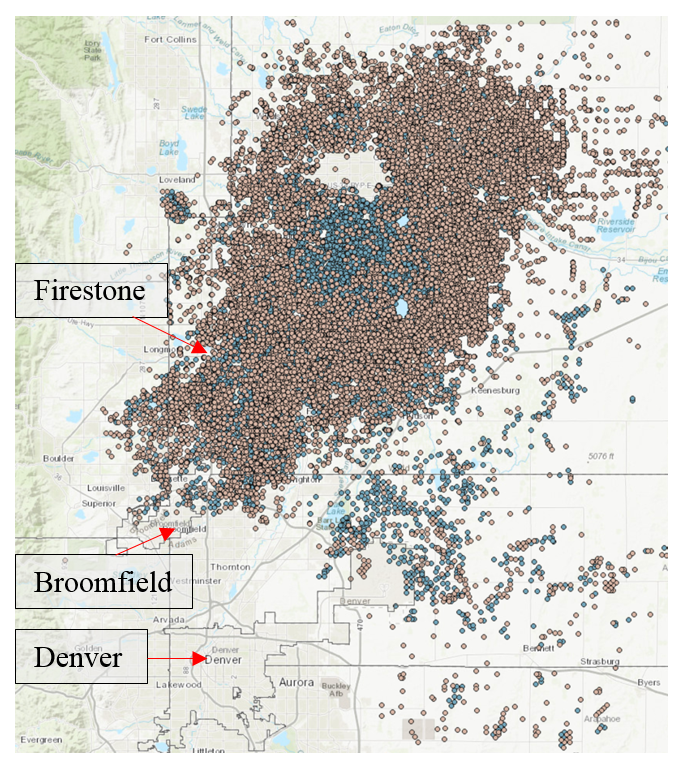 Many residents who have moved to Colorado for the natural amenities such as easy access to hiking, biking, and skiing are surprised when their new suburban home turns out to be in the middle of an oilfield. In one case, this proximity has led to tragedy. Two people were killed in a home explosion in Firestone, Colorado, due to natural gas leaking from an improperly abandoned “flowline.”

Even prior to the tragedy in Firestone, several Front Range cities attempted to ban fracking, leading to a governor’s task force designed to find compromise in the tension between state and local regulatory authority. Not satisfied by the results of the task force, local advocates continue to express concern over health and safety risks from oil and gas development occurring in close proximity to homes and schools. Their concerns are not unfounded. While most studies on this topic fail to provide a clear link between oil and gas development and negative health outcomes, oil and gas operations do release air emissions that are at least potentially hazardous to those living or working close by. At least one recent study has provided fairly compelling evidence of negative health outcomes for newborns carried in utero within 3 kilometers of new shale wells, though the precise cause of the effects (e.g., air emissions, stress) remains unclear.

Advocates for Prop 112 also argue that Colorado, and the Front Range in particular, doesn’t “need” oil and gas development to boost its economy, as they prefer to see growth in other economic sectors that do not carry industrial impacts such as air emissions, traffic, noise, and more.

The Case against Prop 112

Industry advocates argue that oil and gas is an important part of the state economy and a crucial source of public revenue. Revenues driven by oil and gas swing dramatically over time due to volatile commodity prices, but they contribute hundreds of millions of dollars each year, mostly from local property taxes levied on oil and gas properties.

These property taxes support schools and other public services in producing regions, and are especially important for the counties whose economies are most dependent on the industry such as Garfield and Weld Counties, the state’s leading producers (Garfield County is on the Western Slope of the Rockies; Weld County sits just east of the cities of the Front Range). The statewide “severance” tax is less important given the state government’s many other sources of revenue, and—in a quirk of Colorado’s severance tax design—collections actually turned negative in 2017.

Figure 3. Colorado Government Revenue from Taxes on Oil and Gas 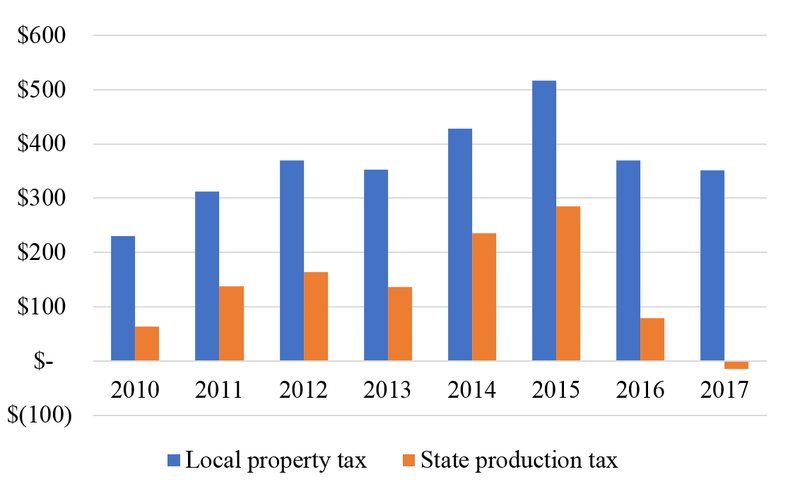 In terms of employment, a similar story emerges: the oil and gas industry is not a major source of jobs for the state as a whole, but for the communities where most production occurs, it plays an important role. Oil and gas employees earn more than twice the average annual wages of workers as a whole, enhancing the local economic impact of those jobs. Across Colorado, a little less than 1 percent of total private sector employment was in the oil and gas industry in 2016, the most recent available year. In a Front Range community like Broomfield, which has previously sought to ban fracking, oil and gas industry employment was just 0.2 percent. But in Garfield and Weld Counties—the big producers—that number was 6 percent.

So what’s the right answer? As researchers and economists, we are most comfortable considering both the one hand and the other. As with many industrial activities, oil and gas development creates positive and negative impacts. Regulation—if properly designed and enforced (a big if, to be sure)—can dramatically reduce negative impacts by internalizing externalities such as air pollution that rightly concern communities on Colorado’s Front Range. The state has taken steps in this direction in recent years, leading the way on issues including methane emissions, which contribute to pollution both local (smog) and global (climate change), and monitoring health impacts through its Department of Public Health and Environment. But will Colorado ever eliminate all of the externalities from oil and gas development? Probably not.

At the same time, the industry provides substantial benefits for Coloradans, with most of those benefits concentrated in a few counties. Having spent considerable amounts of time in these oil and gas communities (in Colorado and elsewhere), we are well aware of the importance of the industry to their economic vitality. Importantly, people who live closer to oil and gas development tend to support it more, suggesting the trade-offs are worth it for many communities.

We also are suspicious of blunt instruments when more targeted policies, which could more directly address the issues of concern, might not throw out the baby with the bathwater.  Unfortunately, voters in Colorado are only being offered this single choice.

Ultimately, we’ll be watching with you on the evening of November 6, eager to learn how Colorado voters in 2018 will weigh the benefits and risks of living with the oil and gas industry. 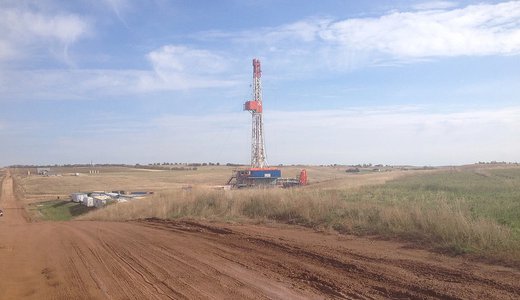 The Health Impacts of the Shale Revolution