For the last year or so, we've been cataloging and analyzing state-level shale gas regulations, as part of our larger project on managing the risks of shale gas development. Regular readers may remember the previews of that research posted here and on the RFF website, featuring maps of regulatory variation. I'm happy to announce that our research project is now complete. Our final report, executive summary, maps, and state-by-state tables are available now.

Here's some highlights. First, what we did:

In a new RFF report, The State of State Shale Gas Regulation, we describe, analyze, and compare 25 regulatory elements related to shale gas development across 31 states. Although not a complete review of all state shale gas regulations, it is the most comprehensive to date—systematically identifying the differences and similarities among states for the first time. 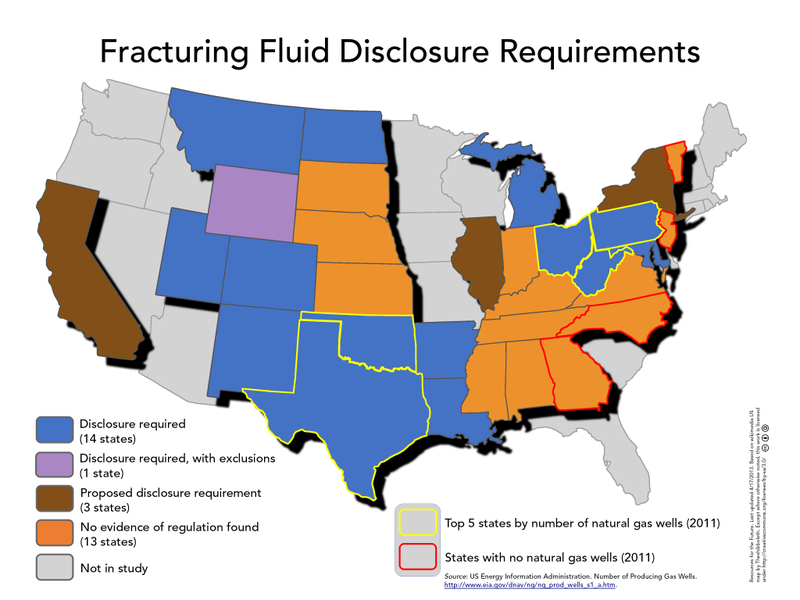 What states regulate—and how they do so:

The report details what type of regulatory tools each state uses, how many regulations a state has relative to other states, and for some regulations, how stringent they are. For the latter two measures, we found a high degree of heterogeneity among states...We found that states regulate anywhere from all 20 elements that we track statistically (West Virginia and, under its proposed regulatory package, New York) to only 10 elements (California and Virginia). The five states with the most gas wells (Texas, Oklahoma, Ohio, Pennsylvania, and West Virginia, shown in yellow) regulate at least 16 elements, more than the national average of 15.6. 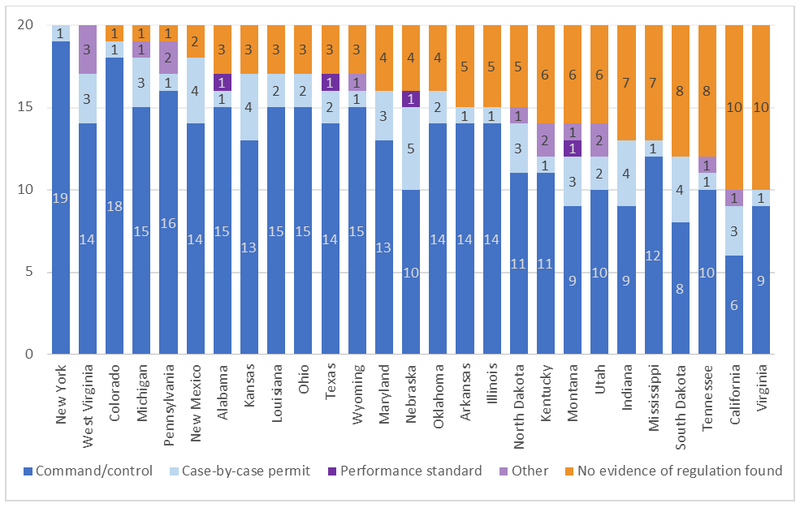 For 13 regulatory elements, at least some states use quantitative regulations. For example, setback rules require wells to be sited a certain number of feet from buildings (with greater setback requirements being more stringent). For these regulations, it is possible to compare regulatory stringency across states.

Stringency can be measured in different ways. For example, when only considering the elements each state regulates quantitatively, Montana and Maryland appear to have the most stringent regulations across these elements, and Virginia seems to regulate them the least stringently. However, most states do not regulate all 13 of these quantitative regulatory elements. Montana only regulates 4, for instance. If elements that each state does not regulate (even by permits) are treated as minimally stringent, their average stringency is different. In this adjusted measure of stringency across elements, the average stringency of all states is naturally lower because every state (except new York, under its proposed rules) has at least one unregulated element. Measuring stringency in this way, Maryland appears most stringent. 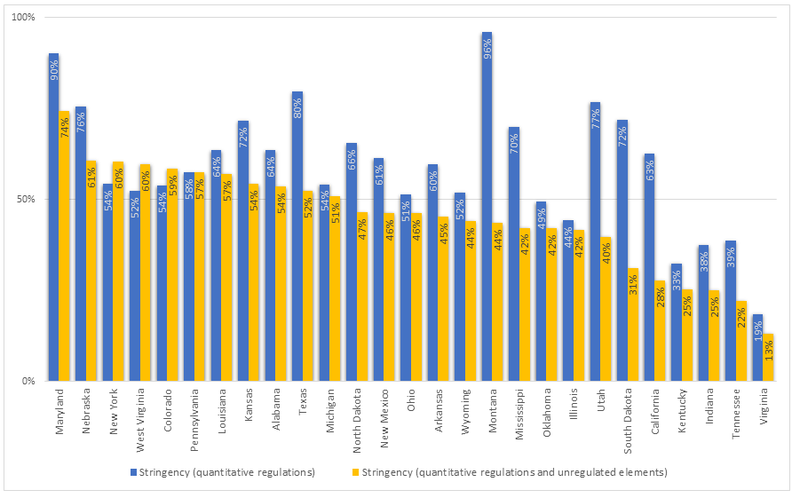 And some preliminary analysis of why states regulate the way they do:

The heterogeneity of shale gas regulations is pervasive. Of course, similar heterogeneity exists in many types of state regulations—from income and sales taxes to speed limits. Regulatory differences may reflect underlying differences of geology, hydrology, demographics, or other factors that affect the local risks of shale gas development—or they could be a result of random variation built up over decades of changing oil and gas regulation, or even political factors. We analyzed the associations between observed regulatory heterogeneity and almost 50 environmental, demographic, political, and other variables. Relatively few statistically significant associations emerged and, at most, these variables could explain only 35 percent of the observed variation in regulatory activities. However, our analysis did find several significant associations. For example, states with more gas wells tend to regulate more elements, perhaps reflecting a greater need for regulation where there is a larger industry presence. Also, regulations that protect groundwater (underground aquifers) tend to be more stringent in states where groundwater makes up a greater fraction of overall water consumption. State regulators can benefit from continued research into the sources of heterogeneity to ensure that they are making decisions that adequately protect the public and the environment.

Note that since our study just includes regulations as written, we can't say which states have the best/most effective/strongest/etc. rules. We also can't yet shed a lot of light on where gaps might exist in state rules, or on debates about the relative role of federal, state, and local regulation. I understand these are the topics many people are most interested in, but we can't say more than what the data can support. To go further, we'd need to know how the rules we found are enforced, and ultimately their costs and benefits. This is very hard to determine, but perhaps not impossible. We're working on it for our next project - stay tuned.

Will Voters Set Back Oil and Gas Development in Colorado? 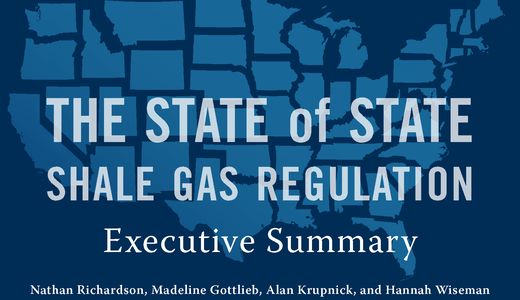 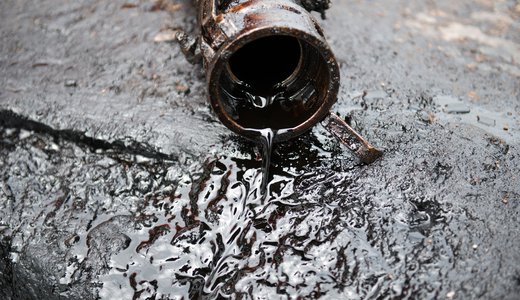