Almost a year ago, Resources for the Future researchers looked at the economic and legal implications of placing a carbon charge on federal coal. So we sat up when, during the recent State of the Union address, President Obama had this to say:

Now we've got to accelerate the transition away from dirty energy. Rather than subsidize the past, we should invest in the future—especially in communities that rely on fossil fuels. That's why I'm going to push to change the way we manage our oil and coal resources, so that they better reflect the costs they impose on taxpayers and our planet.

Then, today, the administration offered their plan: suspending new coal leasing activity until a top-to-bottom review of federal leasing provisions is complete.

A temporary moratorium on new federal coal leasing activity is mostly a symbolic act because the vast majority of coal mined in any given year is from existing leases, and this coal is estimated to last for 20 years. But, as our research showed, it could be legally problematic for the administration to change the terms of leases after they are issued.

Announcing this moratorium now puts the onus on the next administration to decide, once the review has been completed, whether to continue the moratorium or take other action recommended as part of the review.

What the real effect of an expected three-year moratorium on the already-sputtering coal industry will be in the coming years is unknown. It might have been the case that new leasing activity would have been low during this period as coal companies try to write off debt, consolidate, and hunker down through a rough market patch (both domestically and internationally). It might be that leasing that would’ve occurred on federal land will move onto state and private land, or overseas. However, we do know that two lease applications for land abutting existing leases (lease-by-application) affecting over 640 million tons of federal coal were pending at the end of this month.

In the longer term, however, the main question is whether a carbon charge is coming to federal coal (and maybe oil and natural gas).

Here are a few pertinent facts and thoughts:

Coal produced on federal lands is around 40 percent of total US production, is primarily produced in the Powder River Basin in Wyoming, and is used for power production at US electric utilities (although there has been controversy around coal exports via terminals in the Pacific Northwest). It is particularly low in sulfur (think less conventional air pollutants), although its energy content is not as high as other coal on the market so it sells at a low price. If reducing carbon dioxide emissions from burning this coal is President Obama’s goal, we think that internalizing these externalities through a premium on the royalty paid to the government is the best way to go.

But there are a number of issues with this approach. The coal price in the market is set by more expensive coal, probably coming from private lands. Thus, it is not clear that a royalty premium, even one high enough to keep this federal coal in the ground, will lead to much higher coal prices and reduced use and emissions. Reducing this leakage to private producers through an economy-wide carbon tax on fossil fuels is a better way to go, but unlikely in Congress and impossible through executive action. Further, because competition for federal leases is nearly nonexistent, it is not clear that the royalty, if fairly small, would reduce federal coal production. Rather, it could be absorbed by producers through lower bonus bids; or, if coal production becomes profitable, through reduction in profits.

Nevertheless, we think that the symbolic act of putting a small carbon premium on federal coal is useful and can presage more effective and efficient policies in the future. Putting a large premium on federal coal, as our legal analysis concludes, could violate the statutory responsibility of raising revenues for the public if it shut down coal mining on federal land. This “dual mandate”—balancing environmental goals and raising revenues for the American taxpayer—is a key issue that the upcoming reform must address.

Since we wrote our paper, the coal industry has been reeling from a variety of forces, not the least of which is the administration’s Clean Power Plan and plunging natural gas prices. In addition, Chinese demand has fallen and is projected to stay low. While data shows that a lot of the hurt is in Appalachia, federal coal basins are not immune either.

The country’s second and fourth largest coal producers, both large operators on federal lands, filed for bankruptcy in 2015 (Arch Coal, Inc. and Alpha Natural Resources LLC). Both had huge debt problems from acquisitions not necessarily related to federal steam coal production. For instance, Arch acquired a company that specializes in metallurgical coal and Alpha made major acquisitions in Australia. In addition to these two, the twelfth and fourteenth largest coal producers (Patriot Coal Corp. and Walter Energy Inc.) also declared bankruptcy. In 2013, these four companies accounted for 25.3 percent of all coal production in the United States; Arch alone accounted for 13.2 percent. The import of these bankruptcies on the coal market is not yet clear, but it’s important to note that bankruptcy doesn’t necessarily mean less coal production, as the mines can continue to operate.

The bankruptcies could also have fiscal impacts for states, especially Wyoming. The practice of self-bonding, whereby operators (including Arch Coal, which qualified for self-bonding as recently as September 2015) do not post reclamation bonds up front but rely on statements of financial health, means that states may have to cover reclamation costs when a company goes bankrupt. It’s reported that $75 million in cleanup funds would be part of the Arch Coal bankruptcy deal, far short of the $485 million in self-bonding Arch Coal has in Wyoming.

Finally, even before the president’s address, there had been some inkling of reform at the Department of the Interior (DOI). DOI Secretary Jewell held a series of listening sessions over the summer on reforming the federal coal program. During these meetings environmental groups seemed to take a new strategy, arguing, correctly, that federal coal leases were not getting fair returns for taxpayers. Also, DOI published a draft rule aiming to close a loophole whereby coal producers can sell to subsidiary companies, thus lowering their royalty payments. Anything that raises the royalty payments or leasing fees has the potential to reduce federal coal production and carbon dioxide emissions, although the above caveats still hold.

The movement by the administration to consolidate these efforts and provide recommendations for the next president is welcomed. The federal coal program has not undergone serious review or produced a programmatic environmental impact statement (EIS) in more than 30 years—as the next iteration of the program takes shape, it needs to take into account the economic and legal realities that we have identified in our paper. Moving more quickly than three years on the programmatic EIS and clarifying the administration’s statement that there would be “no material effect on the nation’s ability to meet its power generation needs” during the pause, would be helpful. 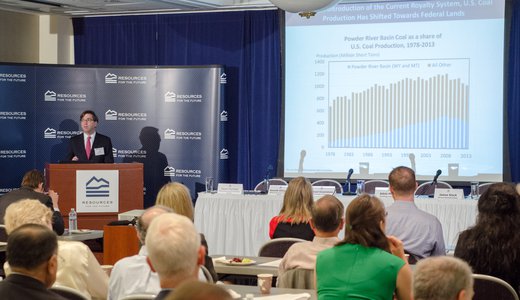 RFF’s Year in Review and Looking Ahead 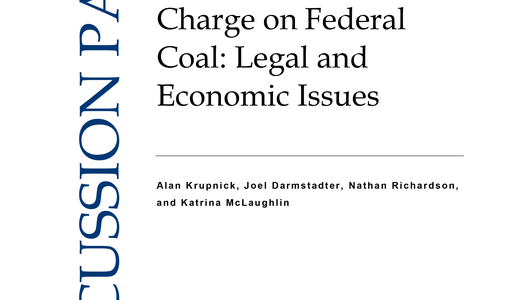