The Obama administration recently proposed a $10 tax per barrel of oil. In a press release, the White House cited reductions in carbon emissions as one of the key benefits of the proposal: “The plan would make public investments and create incentives for private sector innovation to reduce our reliance on oil and cut carbon pollution from our transportation sector, which today accounts for nearly 30 percent of US greenhouse gas emissions.”

In an editorial lauding the proposal, the Washington Post quoted my RFF colleague Alan Krupnick, who made the point that the fee could be larger and should apply to a broader set of fuels. Here's why that's the case:

To analyze the effectiveness of such a plan to reduce carbon emissions, I recently ran the tax through the Goulder-Hafstead E3 model, a large-scale computable general equilibrium model of the US economy.  (For more on the E3 model, see here and here.)

While some of the details of the proposed policy are still unclear, I modeled the tax as an input tax on oil for domestic refiners, regardless of whether the oil was produced domestically or imported. Exports of domestically produced oil are not taxed. Specifically, domestic refiners would be required to pay the $10 fee for each barrel of oil they purchase. And lacking more details, I did not model import taxes or export subsidies on refined products such as gasoline and diesel (the lack of trade adjustments would put domestic refiners at a disadvantage relative to their foreign competitors). 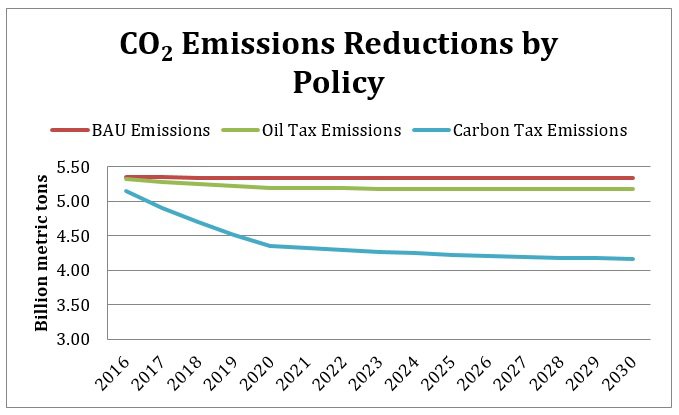 In short, the proposed oil tax is relatively ineffective at reducing carbon emissions. In 2030, the level of CO2 emissions is only 2.8 percent below BAU emissions (oil-related emissions fall by 6.6 percent relative to BAU). The transportation sector, which consumes the vast majority of refined oil products, is not very price responsive and a relatively low tax on oil will simply not lead to significant emissions reductions. This is hardly effective climate policy.

The $10 per barrel tax on oil is equivalent to a $23.26 carbon tax (one barrel of oil leads to about 0.43 tons of CO2 emissions) on oil-related CO2 emissions. The blue line corresponds to a $23.26 economy-wide carbon tax on all fossil fuel-related CO2 emissions. This policy, which treats all fuels (oil, coal, and natural gas) equally from an emissions perspective, is much more effective at reducing emissions. Under this carbon tax, by 2030 emissions are 78.1 percent of BAU emissions, a reduction of 21.9 percent. Such a policy would be much more effective at reducing emissions because it would encourage fuel switching in the electricity sector, which has the potential for significant emissions reductions. It should also be noted that this broader policy would fulfill the US pledge to reduce emissions to no more than 4.3–4.4 billion metric tons of emissions by 2025 under the United Nations Framework Convention on Climate Change (UNFCCC).

To summarize, although there are good reasons for taxing the emissions related to oil consumption, we need to be more ambitious if we are to make meaningful progress addressing climate change. An economy-wide carbon tax, linked to tax reform (see here and here, for example), remains the most cost-effective method of significantly reducing harmful carbon emissions.

Getting to an Efficient Carbon Tax: How the Revenue is Used Matters

Tax Reform and Environmental Policy: Options for Recycling Revenue from a Tax on Carbon Dioxide