Abandoned oil and gas wells make for good news stories: Wildlife Habitat Threatened by Oil Leaking from Old Well; Agency Plugged 300 of 35,000 Orphaned Wells This Year. These wells, many of them drilled in the first decades of America’s oil-drilling era and now orphaned by their operators, can each cost local governments tens of thousands of dollars to clean up.  If they are not properly decommissioned, they may contaminate groundwater or leak methane.

However, in our new RFF report, coauthored with RFF’s Jhih-Shyang Shih and Clayton Munnings, we argue that the scope of the wells deserving concern should be expanded to include all inactive wells—any wells that have not produced oil or gas for a meaningful period of time (typically thirty days or more). All inactive wells carry environmental (and financial) risk.

Today’s regulators and industry engineers have fixed part of the legacy problem of older wells. Oil and gas agencies maintain digital inventories of all wells drilled. Wells are constructed with several layers of steel casing and cement. Wells that have stopped producing are plugged with a combination of clay, cement, and mechanical plugs. And regulations require operators to provide a bond to guarantee proper decommissioning of their wells, which is returned only after the operator has satisfactorily completed the process.

So why do state agencies still see increases in the number of orphaned wells, particularly during industry downturns? And if bonds are supposed to help cover the cost of decommissioning, why do states still require money from legislative appropriations, industry fees, and environmental cleanup funds to deal with these orphaned wells year after year?

A year ago, we launched a research effort to answer these questions and identify ways in which inactive well regulations could ensure that operators—rather than the state or the public—would bear the environmental and financial risks. We examined the inactive well regulations and financial incentives facing well operators with the help of representatives from state oil and gas agencies, scholars in the field, and industry consultants. We asked about the environmental risks posed by these wells, the costs to decommission a well, the size of the bond that operators are required to post, and the regulations imposed on operators when their wells stop producing.

Understanding the last two issues involved thoroughly reviewing the regulations governing inactive wells in 22 states and on federal lands managed by the Bureau of Land Management. (This follows on prior RFF research that reviewed state shale gas regulations.)

Our report identifies a number of reasons why inactive wells don’t always get decommissioned properly (some of these have been articulated elsewhere, in the grey literature, popular press, and peer-reviewed literature):

Map. Presence of a Requirement for Operators to Show Future Usefulness of Temporarily Abandoned Wells 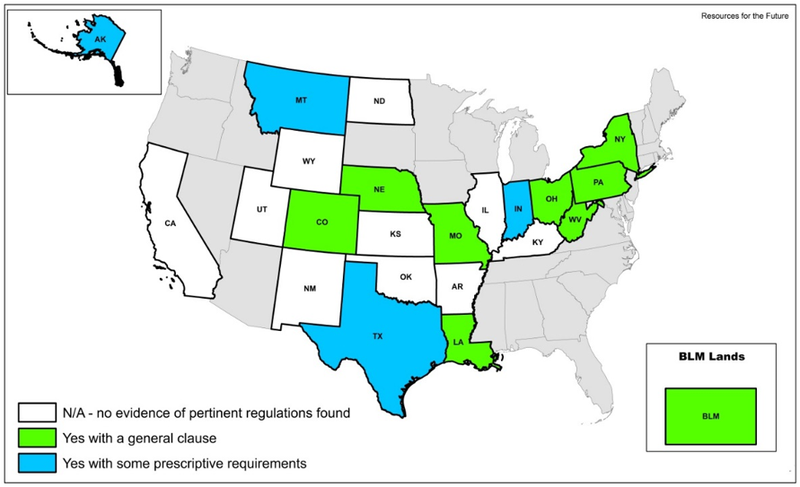 In our report, we recommend the following to help address these issues:

Other recommendations are discussed in the report’s Summary of Key Findings.

Of course, there is always more to be learned. To better understand the nature of the problem, it’d be nice to know how likely it is that a well will leak even after it’s been permanently decommissioned (we’ve heard anecdotal evidence suggesting this), how often operators choose to post blanket bonds (a quantity discount for operators with large populations of wells in a single state), and how effectively the regulations we reviewed are enforced in practice. In addition, identifying why some states have been more effective at monitoring inactive wells and how they’ve been able to introduce ambitious solutions—such as increasing bonding requirements—could be helpful to all states facing this challenge.

The authors would like to thank the Paul G. Allen Family Foundation for funding this project.