A Look at Six State Proposals to Tax Carbon

As the political likelihood of passing comprehensive national climate policy has remained low, many states have taken up the mantle. This devolution of climate policy has been further reinforced by the US Environmental Protection Agency’s (EPA’s) efforts to regulate carbon dioxide from existing power plants under the Clean Power Plan, which requires states to develop their own plans for compliance with emissions standards.

Certainly there is no shortage of policy ideas in the “laboratories of democracy” that indirectly aim at carbon emissions by promoting technology adoption or energy efficiency. Currently, two prominent examples of subnational policies aimed specifically at carbon emissions exist: California’s cap-and-trade system and the Northeast’s Regional Greenhouse Gas Initiative (RGGI), which also employs a cap-and-trade approach. Recently, six states have each proposed legislation to introduce a comprehensive state-wide carbon tax: Massachusetts, New York, Oregon, Rhode Island, Vermont, and Washington. (Vermont has a second legislative proposal that is more stringent but has less support in the legislature at this time.) And in California, where there is a robust cap-and-trade program, some legislators have suggested a transition to a tax.

It should not come as a surprise that these proposals have been introduced by Democratic members of state legislatures, and that these states have a history of ambitious greenhouse gas (GHG) mitigation goals. Massachusetts, New York, and Rhode Island all have targets to reduce their GHG emissions by 80 percent of 1990 levels by 2050, while Oregon and Vermont have goals of 75 percent reductions of 1990 levels by 2050, and Washington set a target of reducing 25 percent of 1990 levels by 2035. Furthermore, Massachusetts, New York, Rhode Island, and Vermont are all existing members of RGGI, already demonstrating political willingness to take policy action on climate change.

For RGGI states that also have carbon tax proposals, there is some degree of uncertainty about how the proposed policies would interact with existing policies. Only in Rhode Island have policymakers explicitly addressed this, providing that electricity generation sources covered by RGGI would forfeit only the difference between the auction clearing price and the tax level, so that their emissions would not be burdened twice.

Despite the similarities in political conditions across these six states, the designs of their proposed policies are heterogeneous—differing, for example, in terms of the pollutant covered by the policy. Historically, most policies have focused on targeting carbon dioxide emissions exclusively, as these are responsible for the majority of GHG impacts and are easiest to measure. Half of the states—Oregon, Washington, and Vermont—cover only carbon dioxide with their tax proposals. The others—Massachusetts, Rhode Island, and New York—go a step further and also include methane emissions, which make up a smaller proportion of total atmospheric warming emissions but are more potent. New York also proposes to include other nitrous oxides and any combustion-related GHG emissions.

The stringency of the proposed policies also varies across the states. As highlighted above, the coverage of pollutants differs. All else equal, the policies of those states with fewer pollutants covered are relatively less stringent. In addition to the coverage, the price (tax rate) also determines a policy’s stringency. The initial price level varies from $10 per ton of carbon dioxide equivalent (tCO2e) in Massachusetts to $50 per tCO2e in New York, with the other proposals falling in between. More important, however, is a policy’s price path, which determines how the tax rate evolves over time. The bills from Rhode Island and Washington both include automatic increases at the same rate as the Consumer Price Index (CPI), ensuring that the rate does not get outpaced by inflation. By 2026, in real terms (i.e., assuming no inflation), the price of the proposed policies varies from $15 per tCO2e in Rhode Island to $185 per tCO2e in New York (see figure). 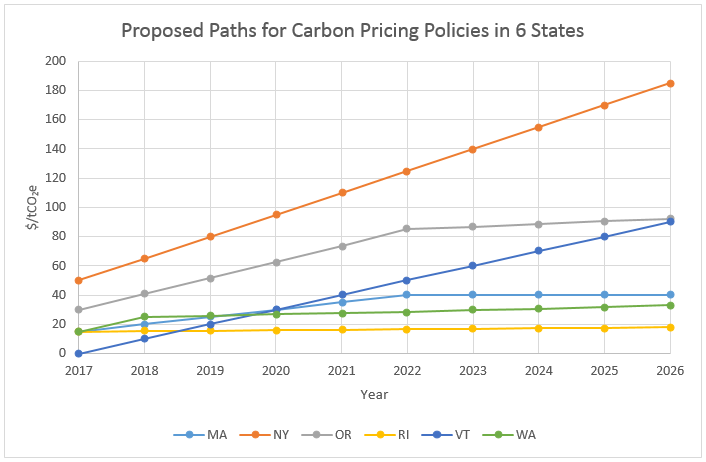 The figure above has been updated slightly from the original post.

The design differences among the states’ carbon pricing proposals demonstrate the flexibility of a carbon tax, including the wide range of options for implementation, at any scale of government. EPA’s Clean Power Plan has room for states to use a carbon tax for compliance, although states that might choose this compliance pathway would have to overcome additional hurdles to satisfy EPA requirements.

Each state’s proposed carbon tax policy stands to raise considerable revenue. How this revenue is used will be vital in determining the outcomes. In a follow-up blog post, we will investigate how these policies propose to use the revenue as well as the implications for affected households.

Washington State’s Initiative 732: Impact on Electricity Prices Should be Small