The Value of Milder Weather

Many Americans travel to escape the weather—we head to the beach in February or visit Maine in the summer. The weather can even factor into our moving decisions. As a result, we can think about climate as an amenity for which people are willing to pay. Understanding the amenity value of climate (what people are willing to pay to experience warmer winters or avoid hotter summers) is an important component of the benefits of climate policies. Household location decisions—which balance earnings opportunities and housing costs against local amenities, including summer and winter temperatures, rainfall, snowfall, and humidity—can provide some insight into this issue.

In recent research with my colleague Paramita Sinha of RTI International, we reviewed residential location choices for US households in 2000 to estimate how much households are willing to pay for changes in mean winter and summer temperatures under two climate scenarios. Both are taken from the Intergovernmental Panel on Climate Change’s Special Report on Emissions Scenarios, which presents a set of emissions scenarios based on different demographic, economic, technological, and environmental developments.

Scenario 1 is the more climate friendly, projecting that the atmospheric concentration of carbon dioxide (CO2) will reach 550 parts per million (ppm) in the year 2100. As a result, on average, summer temperatures will increase by 3.3°F in 2050, and winter temperatures will rise by 3.4°F.

The more dramatic Scenario 2 leads to an atmospheric CO2 concentration of 850 ppm, resulting in a 3.6°F rise in summer temperatures and a rise of 2.1°F in winter temperatures, on average.

Our results indicate that households are willing to pay to avoid cold winter temperatures and hot summer temperatures; however, these values vary significantly by residential location. In general, we see the following:

“The amenity value of climate could significantly increase estimates of climate damages, even for moderate temperature increases.”

Estimates of market-based damages associated with climate change in the United States have typically been in the range of 1 percent of gross domestic product for an increase in mean temperature of 2°C (3.6°F). Because Scenario 2 would result in average increases of 3.6°F in summer temperature and 2.1°F in winter temperature, our results suggest that the amenity value of climate could significantly increase estimates of climate damages, even for moderate temperature increases.

Maureen L. Cropper is a senior fellow at RFF and distinguished university professor at the University of Maryland. 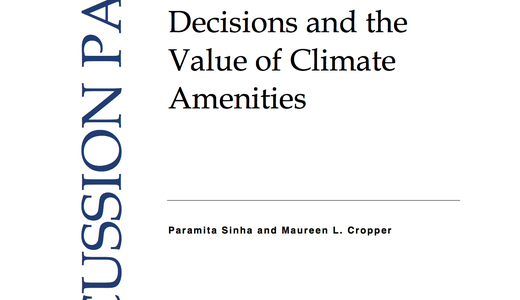 Household Location Decisions and the Value of Climate Amenities