The Costs of Competing Goals in Fishery Management

In 2015, the National Oceanographic and Atmospheric Administration’s (NOAA’s) annual census of US commercial fisheries reported that the number of fisheries classified as overfished had dropped to its lowest number since the census started in 1997. Many lauded the success of approaches in the United States to sustainably managing the nation’s fisheries—and they specifically credited the Magnuson-Stevens Fishery Conservation and Management Act with this progress.

Passed in 1976, the Magnuson-Stevens Act is the primary law in the United States that governs marine fishery management in US federal waters. According to NOAA, it “fosters long-term biological and economic sustainability of our nation’s marine fisheries out to 200 nautical miles from shore,” using scientific analyses to evaluate fish stocks and provide economic benefits.

One policy tool for managing federal fisheries in the United States is market-based permit trading, or quota, programs. These programs function by setting a cap on total fish harvested and allocating permits (called quotas) to fishers, authorizing the holder to fish a portion of the total harvest and also allowing fishers to trade quotas. Historically, a primary motivation for implementing permit trading programs has been to increase economic efficiency. Under the assumption of well-functioning markets, quotas are expected to be traded to the most profitable fishers and thereby maximize the profitability of fishing the available catch.

Increasingly, fishery managers aim to design these trading programs to also meet socioeconomic objectives, such as job retention in remote fishing communities. In fact, National Standard 8 of the Magnuson-Stevens Act requires that the design and evaluation of management policies take into account the impacts on fishing jobs and communities in order to sustain participation and minimize adverse economic impacts. Objectives related to the welfare of coastal fishing communities arise due to the dependence of local economies (for example, school attendance and grocery store revenues) on the presence of fishers and their families. However, addressing these socioeconomic concerns is not without cost, and there is no consensus on how best to address these objectives in the design of management policies.

To better understand the trade-offs inherent in designing programs to meet competing goals, we recently collaborated with Daniel K. Lew of NOAA to study a tradable permit program used to manage the Alaskan halibut and sablefish fisheries. The program is well suited to studying multiple objectives. Restrictions on quota trading were imposed to address concerns about the potential impacts of the program on the social and cultural characteristics of fishing communities in Alaska—for example, the concern that larger operators would buy out smaller operators. Not only is the program designed to meet social and community goals, it also is one of the longest-running tradable permit programs for fisheries in the United States, and NOAA has collected detailed data throughout the course of the program related to its functioning. This allows us to develop one of the few empirical measurements of the costs of meeting these non-efficiency goals. Our results suggest that trading restrictions come at a significant cost, reducing permit value by as much as 25 percent.

The Alaskan Halibut and Sablefish Program

The Alaskan halibut and sablefish program was implemented in 1995 by the North Pacific Fishery Management Council, the regulatory body overseeing the management of the fishery. Prior to the implementation of individual transferable quotas (ITQs), both fisheries were managed using restrictions on season length as a means of restricting catch. However, both fisheries went through periods where significant numbers of boats entered the fishery, causing the season lengths to be progressively shortened in an effort to avoid exceeding the annual catch limits.

This changed with the introduction of the ITQ program. At the inception of the program, the North Pacific Fishery Management Council granted revocable permits, called quota shares, to past participants in the fisheries. The quota shares were allocated based on the fishing history of each participant. Ownership of quota shares for a species grants the owner the privilege to fish a percentage of the species’ total allowable catch—which is set to sustain healthy fish populations—in an area each year and in perpetuity. Yearly allowances in pounds of fish, called individual fishing quota (IFQ) pounds, are determined by multiplying the percentage of the total allowable catch to which an individual is entitled by the total allowable catch.

By setting a cap on total catch and allocating the catch to fishers via yearly quotas, the yearly total allowable catch could be met while allowing fishers to fish for the entire year.

To keep smaller-scale fishers and those from more remote communities in business, quotas were set aside for relatively small operators and those with small vessels. This has the effect of restricting trade between large vessel owners and relatively small vessel owners and between larger and smaller fishing operations. Two restrictions are of particular importance: the vessel class restrictions, which limit the use of specific quotas to boats based on their length, type, and ownership; and a practice called “blocking,” which makes some quota shares tradable only as an indivisible block that can be owned only by relatively small-scale operators.

The vessel class restriction dictates the ownership, type, and length of vessels permitted to fish IFQ pounds, based on four categories. With regard to ownership, Class A quota shares and IFQ pounds are the least restrictive: they can be owned by a corporation or an individual, and can be fished by a vessel with or without the owner on board. All other classes of quota shares may be fished only when the owner of the IFQ pounds, who must be an individual, is on board. The class also dictates the type and length of the vessel on which the IFQ pounds can be fished.

In both fisheries, Class A is the only one that can be fished on “catcher-processor” vessels—of any length—that both catch fish and process it at sea. All others must be fished on catcher vessels, which deliver their catch to shore-side processors. Classes B and C in the sablefish fishery and Classes B, C, and D in the halibut fishery designate a variety of sizes of catcher vessels on which the IFQ pounds can be fished, from largest (B) to smallest (D).

The blocking restriction makes some quotas transferable only as an indivisible block. At the beginning of the program, participants who had relatively little fishing history received their quota allocations as a block. Holding more than one block of quota shares disqualifies a participant from holding unblocked quota shares. Furthermore, there is a limit on the number of these small blocks that a participant fishing blocked quotas can hold, which effectively limits the total amount of quotas such a participant can own.

"The vessel class and blocking restrictions in the Alaskan ITQ program reduce the total value of quotas in the halibut and sablefish fisheries by 25 percent and 9 percent, respectively."

In our analysis, we examined one of the best empirical measurements of the economic value that results from ITQ program implementation: data on the prices participants received when selling their restricted and unrestricted quotas to other participants over the years 2000 to 2011. Quota prices reveal the economic return to the fishery resource. We focused on how the vessel class and blocking restrictions affected the value of quotas.

Comparing the aggregate cost of both restrictions to the total value of the quotas in each fishery gives us estimates of the percentage efficiency loss due to the set of restrictions. Across all our models and the time period 2000 to 2011, we find that the vessel class and blocking restrictions in the Alaskan ITQ program reduce the total value of quotas in the halibut and sablefish fisheries by 25 percent and 9 percent, respectively.

When multiple management goals exist, using a single policy instrument to accomplish all the goals simultaneously poses challenges for policy design and can reduce a policy’s economic efficiency. A tradable permit program can create additional economic value, but as we have shown, altering program design to address other objectives entails trade-offs. But introducing restrictions on a program’s design also can have positive impacts, including furthering social and community goals, and can lead to buy-in from stakeholders and earlier program implementation. Policymakers must weigh the expected costs against potential benefits.

Designing tradable permit programs to address multiple objectives occurs in settings outside of fisheries, such as for regulation of air, water, and other sources of pollution. Our current results are relevant for the design and assessment of programs attempting to achieve multiple objectives through the imposition of trading restrictions. For example, programs often include only a subset of user groups, limiting the efficiency gains from potential trades among sectors. In some of the recently implemented pilot programs for carbon cap and trade in China, sectors including transportation, water, hotels, restaurants, and public institutions are excluded from the programs.

We also can look to distributional concerns over who will bear the burden of a policy change, which are commonly considered during policy design. For example, there is concern about the impact of market-based climate and air quality regulations on less well-off citizens and countries, and questions about how trading of pollution allowances may impact citizens in areas where permits are bought and sold.

Learning from past experiences by quantifying the costs and benefits of current program designs can lead to a better understanding of the impact on outcomes—and ultimately to the development of better methods to assess proposed program designs in the future. Building on this research, we are working with NOAA researchers Daniel K. Lew and Steven Kasperski to retrospectively evaluate the impact of the vessel class and blocking restrictions on community-level outcomes under the Alaskan halibut and sablefish ITQ program—particularly the effect on vulnerable communities and community participation in the fisheries. This work will help determine whether the quota trading restrictions have contributed to or detracted from meeting National Standard 8, as well as give a more complete picture of the costs and benefits of including social objectives in the design of Alaska’s ITQ program.

James N. Sanchirico is a professor of environmental science and policy at the University of California, Davis, and an RFF university fellow. His work primarily focuses on the economic analysis of marine policies, especially the effects of individual transferable quotas and marine protected areas. 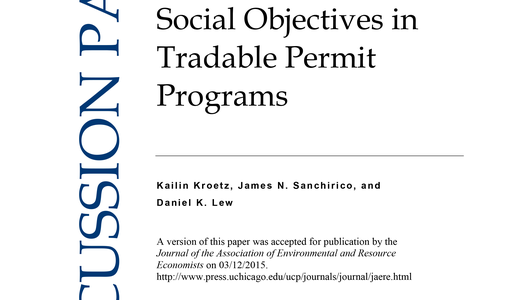