Infographic: Who Pays to Plug Inactive Oil and Gas Wells?

Plugging inactive oil and gas wells—those that have stopped producing for a certain period of time—and restoring well sites are the responsibility of the well operators. However, many inactive wells are left unplugged by the responsible operator. If left unplugged, an orphaned well can be an environmental liability: methane can leak into groundwater or the atmosphere, or brine—which may carry heavy metals or other pollutants—can leak into groundwater or surface water.

State and federal regulations require well operators to post bonds that are released only when they have properly decommissioned their wells. Despite this, several states have long lists of orphaned wells. As of January 2015, Kansas had reported more than 4,400, and as of July 2013, Louisiana had reported more than 2,800. In new research, we show that the costs of decommissioning these wells can be high—and these costs are often paid for by the states instead of the well operators.

When the cost of decommissioning a well exceeds the bond amount, the operator lacks the incentive to clean up and might choose to leave the well in a state of temporary abandonment instead (pending a decision to restart the well or close it permanently). In the meantime, operators may become financially insolvent or records may be lost, leaving the state with the liability, which often exceeds the bond amount.

Aligning bond amounts with actual decommissioning costs is essential for ensuring that well operators pay to decommission their wells and, therefore, for protecting the public from environmental risks. A number of states have worked to increase their bonding requirements in recent years, including West Virginia, Maryland, Wyoming, Missouri, and Kentucky. In our new report, Plugging the Gaps: Recommendations for Reforming Inactive Well Policy, we offer recommendations for revising bond amounts, protecting states from expensive decommissioning costs, and managing inactive wells. 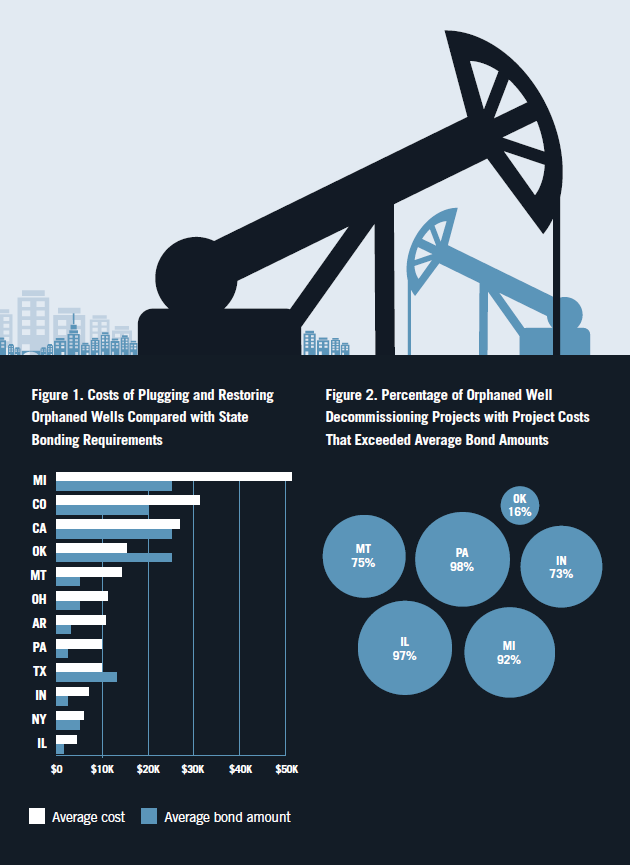 The authors would like to thank the Paul G. Allen Family Foundation for funding this project.

Jacqueline Ho is a development officer and research assistant at RFF.

Alan J. Krupnick is a senior fellow and co-director of RFF’s Center for Energy and Climate Economics.