A Look at 35 Years of Flood Insurance Claims

The historic rainfall and resulting floods that paralyzed South Carolina in October 2015 and claimed several lives served as another tragic example of the toll these disasters can take. In fact, of all natural disasters, floods are the most costly and have affected the most people in the United States. Yet many homeowners remain uninsured against flood damage.

A 2006 RAND Corporation report estimated insurance take-up rates from a random sample of homes across the country and found that only about half of single-family homes in 100-year floodplains have flood insurance, although there is substantial regional variation. Even more alarming, a report by the New York City Mayor’s Office published after Hurricane Sandy revealed that 80 percent of residents living in areas inundated by storm surge had no flood insurance.

In a recent article in the Journal of Risk and Insurance, we look at the history of flood insurance claims from the National Flood Insurance Program (NFIP). This federal program is the main provider of flood insurance nationally and has been since 1968. In the paper, we analyze a database of over one million claims between 1978 and 2012 made available to us by the Federal Emergency Management Agency (FEMA), looking at factors that lead to higher or lower claims, as well how claims are distributed across time and space.

Some of our findings are surprising. Some are predictable. But they all shed insight on possible reasons for low insurance demand and the challenges the debt-ridden NFIP faces financially.

Most Claims Are Modest, but Some Aren’t

It is not clear that individuals living in flood-prone areas understand the damage that they may sustain in the event of a flood. Most outreach on flood risk has focused on the probability of a flood, not the damage that would occur from floods of different magnitudes. Our analysis of claims offers some insight on the damages homeowners may face should they be flooded.

Our results show that the majority of claims are for modest amounts, but a small percentage are for very large amounts. Half of claims are for less than 10 percent of the building’s value (see Figure 1). While the majority, then, are not extreme, a small portion of claims exceed three-quarters of a building’s value. Across all years, 7 percent of claims are on this higher end, and when the year of Hurricane Katrina is excluded, the share drops to 3 percent. Looking across all 35 years, the mean flood claim is $33,764 (in 2012$). This average is pulled up by a few very large claims; the median is much less at $12,555.

This overall trend is mimicked when looking at NFIP claims by year. Most years had manageable levels of claims payments, but when Hurricane Katrina hit in 2005, NFIP paid out more in claims than it had over the life of the program, reflecting the catastrophic nature of flooding. 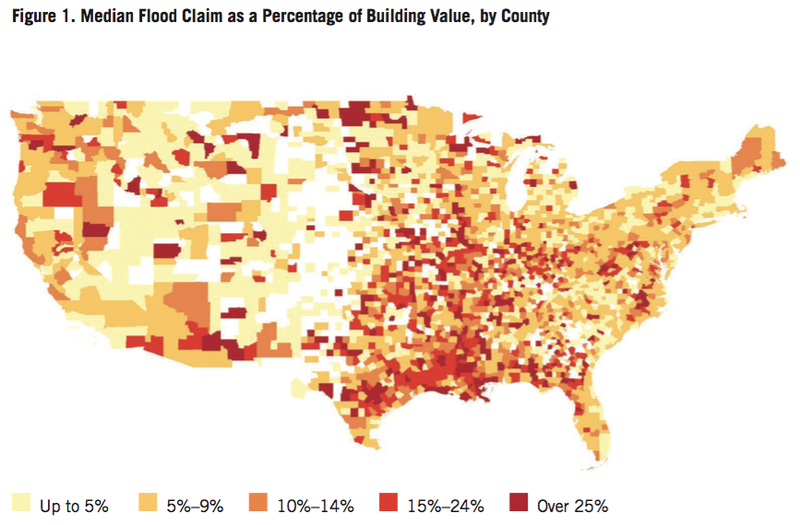 The good news is that hazard mitigation works. We find that homes known to be elevated have claims that are 16–18 percent lower than others. And communities that are voluntarily engaging in flood mitigation activities also have lower claims.

NFIP policies are not distributed evenly around the country. Roughly 37 percent of the more than 5 million policies in force around the country are located in Florida. Texas accounts for the second-highest share of policies at 11.5 percent. This is followed by Louisiana. Unsurprisingly, total claims paid are highest where there are many policies in force, such as along the Gulf Coast, and where major flood events have occurred, such as Louisiana, Florida, and the New York/New Jersey region. The largest percentage of paid claims is Louisiana, at 21.5 percent, followed by Texas at 12.5 percent, and Florida at 10 percent—all places that have had major hurricanes hit over the last decade.

When mapping median claims, however, the highest claims are scattered around the country. Sometimes they are on the coast, sometimes inland along major rivers. Although Louisiana has some areas of high median claims, Florida largely does not.

Two groups of properties have proven to be particularly financially burdensome to the NFIP. The first consists of properties that had already been built in high-risk areas when the program was created. These properties were built to lower building standards and have historically received discounted premiums. Because they were built before FEMA created flood insurance rate maps, or FIRMS, the NFIP categorizes them as “pre-FIRM.”

Properties in the second group, which overlaps with pre-FIRM properties, are referred to as “repetitive loss” properties. When a property has two or more losses of at least $1,000 over a 10-year period, it obtains repetitive loss status. The US Government Accountability Office reported in 2004 that these properties account for only 1 percent of policies but 38 percent of claims between 1978 and 2004. Unlike a private insurance company, FEMA cannot deny coverage to these properties.

We find that claims from pre-FIRM properties, relative to home value, are 42–45 percent higher than other properties. It was thought that policies categorized as pre-FIRM would phase out over time because these homes must switch to standard policy coverage whenever they are substantially damaged or improved. We find that although pre-FIRM properties represented over 80 percent of NFIP policies through the mid-1980s, they now represent less than 50 percent of policies. The percentage of claims that are pre-FIRM, however, has not fallen as quickly, with over 60 percent still coming from these properties. Legislation passed in 2014 will slowly phase out the premium discount these properties have been receiving, bringing them closer to paying rates that reflect their higher risk.

For decades, FEMA has concentrated its public communication efforts on the probability of a flood occurring—but research has repeatedly shown that individuals have a hard time fully understanding low-probability events. We believe that information on regional claims should be more widely discussed with those living in exposed areas to help residents become more knowledgeable about what damages they would suffer after a flood.

As noted earlier, we find evidence that most flood insurance claims are modest but a small number can be quite severe. Homeowners may have different preferences for how to protect themselves against uncertain risks of this kind. To account for these differences, the NFIP could consider two strategies to encourage flood insurance purchases:

Strategy 1. Insurance coverage for small losses only. Some homeowners may prefer insurance coverage against the more likely, moderate, flood damages. This type of policy would cover the vast majority of losses the property is likely to sustain, but would leave homeowners vulnerable to rare catastrophes. Although the probability of those rare events is small, should they occur and homeowners not be protected, they could suffer devastating financial losses.

Strategy 2. Catastrophic coverage only. Other homeowners may prefer coverage for just the most extreme events, choosing to self-insure for lower amounts. Such a catastrophic policy would be cheaper than more comprehensive coverage because the probability of suffering a truly catastrophic loss is very low. It may be challenging for high-risk low- and middle-income families, though, without the liquidity to cover non-catastrophic losses.

The concentration of exposure along the Gulf Coast and the possibility for extreme loss years, such as 2005, highlight the challenges faced by the private sector with regard to flood insurance. It is quite expensive to guarantee access to sufficient capital to cover the extreme loss years that are possible. From a pure cost-of-capital perspective, this constitutes a notable advantage for the federal government. To increase private-sector participation in flood coverage, however, one option is for private insurers to cover losses up to a certain point and have government backstop losses for the very rare events. This is done today for two other types of low-probability, high-impact catastrophes: for terrorism through the Terrorism Risk Insurance Act, established in 2002, and for nuclear accidents through the Price Anderson Act, established in 1957. In both cases, the first layer of losses would be assumed by the private sector, while the second layer would be covered by the government.

The challenge with a public-sector program, however, is that considerations beyond risk influence pricing (see Kousky and Shabman in Further Reading). As noted earlier, in an effort to encourage program participation, some properties historically have been receiving discounted rates. The program also cannot deny coverage to even the riskiest properties. Both of these challenges have led to the program’s current debt, which is on the order of $24 billion. The trade-off is that at higher rates, without a mandate to purchase coverage, many households at risk of floods would simply go uninsured.

Carolyn Kousky is a fellow at RFF.

Erwann Michel-Kerjan is executive director of the Wharton School’s Risk Management and Decision Processes Center at the University of Pennsylvania. 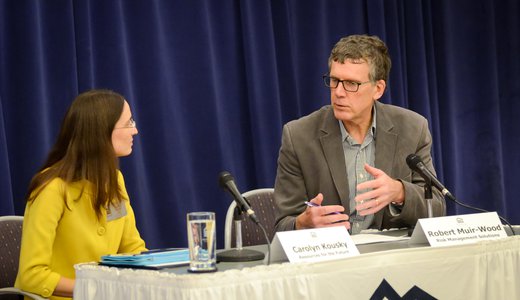 Disasters, Resilience, and the "Cure" for Catastrophe

Pricing Flood Insurance: How and Why the NFIP Differs from a Private Insurance Company